City Lights Books, obviously, needs no introduction.  What’s probably lesser known is what they’re up to these days, almost 60 years removed from the publication of Howl.  One way the old Beat poetry legend is keeping busy is releasing books through their City Lights Spotlight series.  As City Lights puts it, the Spotlight series “shines a light on the wealth of innovative American poetry being written today. . .In doing so, we also hope to draw attention to those small presses publishing such authors.”

Sounds good to me, City Lights.

The seventh book in the series is Julian Talamantez Brolaski’s book, Advice For Lovers.  The book reads as a series of small, abstract poetic tips.  My attention was grabbed immediately by xyr poem “Discipulə Amoris”:

Now hearkneth to me lording and good lades-

Learnt in all the blossom ways that love is

Lernt in that sweet science of bruising

Which renders lewd, so that your choosing

You may yet plot to snare your pet

Or blaze thir parts in englyssche, or by your very glance

To hook a hating falconet.

Hearken – and you’ll spin on proferrments to dance

Ladings listen, if you would loving prove

And glorify the lewd, lust and Love.

Wow, not often you see a schwa used in a poem.

What fascinated me about the piece was the play with sound.  Our tones here are conflicting.  The verses, even within the same line, are both archaic and contemporary, and the meeting of those two conflicting tones begets a tone that is satisfyingly experimental.

On top of that, the appearance and phonetic makeup of words take precedence over spelling or using words more common to our current lexicon.  Notice how in lines 4 and 5 the word “learnt” is spelled differently.  It’s unclear to me exactly why Brolaski made this choice, but I would guess it’s either for visual effect or (and perhaps more importantly) to announce to the reader where convention falls on xyr poetic priorities.

What steals the show in many ways is the imaginative use of assonance and dissonance both visually and sonically.  There’s plenty of traditional assonance here, such as “To hook a hating falconet.”  A line like that, no matter how conventionally singsongy, still hits the right notes with me.  Traditional assonance is all over the place here and works.  Then there’s the not-so-conventional uses of sound and sight.  It took me several read throughs and a kind suggestion from google’s predictive algorithm  that “englyssche” is likely supposed to be read as “English (upon looking for a translation, Google gently suggested: now showing search results for ‘english translation to english’).”

It is wonderfully innovative and fresh work by Brolaski and is only the introduction to the rest of the poetic advices.  If you’re concerned that Brolaski’s content is a bit too neat and tidy, you shouldn’t, Brolaski doesn’t pull punches.  Here’s “I Am My Own Big Brother” from the very next page:

Call me a cunt, I am my own big brother,

I’m spitting on the nail I ought to clip

To make my heart thump harder on the lam.

That rhyming hazard that you thot you writ

That fucks folks harder than a free verse can

Is lisping with its colored consonants

Is buggering the fuck out of abstinence,

While my bitch sits high atop the firmament

Tugging at the garter of the god of gods-

& with such look of am’rous compliment

I blushed to voice, flushed to blow thir wad.

My rhymes, though sometimes given to be shallow-

Will not their horns unspill, nor pose themselves as fallow.

Not a punch pulled.  Read this book.

Advice For Lovers was published in 2012 by City Lights Books in San Francisco, California.  You can visit their website for more poets being published through the Spotlight series and the rest of their extensive library.  You can also visit Julian Talamantez Brolaski’s blog for more work. 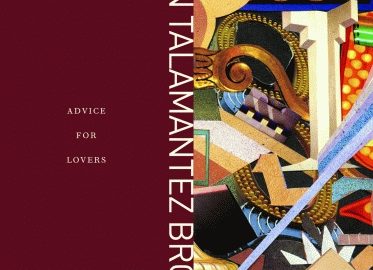