“Life is short and hard, pass the beer nuts, please.”

At about the halfway point of Peter Ferry’s Old Heart, I dropped the book into my lap and said aloud (to myself or to my cat, I’m not sure): “Why the hell don’t more people know about this?”  The book follows the story of Tom, who, in his old age, decides to travel back to Europe to find the Dutch girl he fell in love with during World War 2.  It seems at first glance like the simple tale of an old man going on his last adventure; a basic story about love lost, and of living a life steeped in what-ifs from the past.  To be frank, it sounds like a story the Hallmark movie channel would kill to get their mitts on.  I thought it was going to be cute and lighthearted.  But then I started reading, and realized there’s far more depth packed into this quiet little book than I had first assumed.

The sentence-level writing in this book is superb.  I found myself marking page numbers with new favorite sentences left and right.  I was consistently delighted – not pleased – overly excited about Peter Ferry’s talent.  I don’t frequently say writers are “talented” because I feel it’s a loaded word, but Ferry has an inimitable ease about his writing.  He’s not overly flowery, and he doesn’t reach for shock and awe.  His measured candor makes the author disappear, leaving behind the main character to stand alone in the spotlight. Tom is a guy who is hurting, and hoping, and trying to decide what to do with the past dreams that he’s still gripping with a white-knuckled fist.  He’s just your average guy, but Ferry is able to communicate his deepest thoughts in a highly engaging manner.  Almost every other character is just as captivating as Tom, as well.  Here is just one of my favorite characterization gems:

“Listen, when I was a girl and I heard the parable of the prodigal son, I always identified with the other son, the one who stayed and worked hard and did his duty.”

Every time I assumed the book had settled into a typical literary fiction cadence, it threw me something subtle, but different.  A bit of fascinating World War 2 history, an addition of cultural nuance, or a new and unexpected fact about a peripheral character.  Even the main plotline kept surprising me with new information and twists.  I suppose this speaks to the story’s masterful pacing and organization.  I consider a book’s organization to be a bit of an underestimated element; like the Best Sound Editing category at the Academy Awards.  But truly, organization and pacing are nearly as essential to keeping a reader’s attention as the content itself.  The perspective switches in the book were at times a tiny bit muddled (there are technically two narrators), but I never found it distracting, and I was so engrossed in the book that I really just didn’t care about a few less-than-perfect transitions.  As an editor, I geek out over this stuff, but to any normal reader, the reading experience of Old Heart is seamless, entertaining, and steadily moving forward, just as it should be.

Aside from Ferry’s intuitive turn-of-phrase and the structural excellence of the book, my other-other favorite piece is the unexpected variety of the social dynamics.  There are strained marriages, unwieldy and overbearing grown children, children with Down’s syndrome, pushy in-laws, old war companions, foreign characters who communicate only through gestures and facial expressions, and even a curious cab driver who has a broken driver’s seat.  Each character, large and small, is allowed a real presence in the book.  The cab driver isn’t just there to take Tom from Point A to Point B, he sets the mood for Tom’s own inner monologue, and embodies a kind of unspoken confirmation of Tom’s choices.  The Dutch lawyer isn’t just there as a planted plot device to help Tom find information, he’s a man who remembers how much the Americans meant to his father during the war, and therefore feels compelled to assist him.  Old Heart truly has a tremendous cast, which adds layer upon layer of interest and emotional connection.

If the old man from Disney’s Up had written Marilynne Robinson’s Gilead, it would end up as a very similar work to Ferry’s Old Heart.  It’s the very successful telling of a normal, average person’s life, which is an impressive achievement.  It’s crotchety, but still introspective and emotionally intelligent.  It is a deep exploration of end-of-life regret, but also a story of hope, doubt, and personal drive found through desperation and the unknown.  If you enjoy non-boring literary fiction, non-sappy romance, history, travel, or any combination of these things, you will enjoy this book. 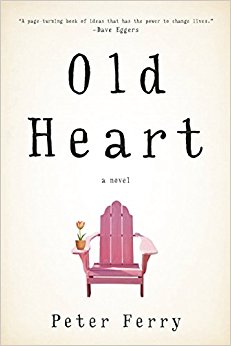