Welcome to Gail Carriger’s world of spies, steampunk, and scandal where tea is of the utmost importance and supernaturals are pesky creatures at best. Set in Victorian England, Prudence picks up twenty years after Carriger’s breakout series the Parasol Protectorate leaves off. It follows Lady Prudence, known as Rue to her friends, as she leaves on her first assignment for queen and country.

Rue is an aristocrat spy raised by a gay vampire and his staff of well-dressed dandies. Yes, it is as ridiculous as it sounds, but that’s part of the fun of Carriger’s novels. And, no, that’s actually not the most ridiculous thing that happens in this book.

On her dirigible, the Spotted Custard, Rue is sent to India to investigate a new strain of tea and the East India Trading Company’s underhanded dealings with the locals. There she becomes immersed in a political scandal. The kidnapping of an officer’s wife has gotten the werewolf pack stationed there, distant cousins as it happens, into serious trouble. Plus, someone stole the tea. Rue must figure out who is lurking in the jungle and what their angle is before she can return home to London. Luckily, she has some peculiar gifts that no one else in the world possesses—she can temporarily steal a werewolf’s or vampire’s abilities.

For new readers, this book is a delightful romp through an imaginative world with fashionable hats, saucy immortals, and exotic lands. The reader explores first London with its steam-powered coaches and snobby parties, then India with its bursts of color and strange mythology. We follow Rue as she blunders through one adventure into the next. It’s a coming-of-age story that’s enjoyable for teens as well as adults. What’s nice is the richness of Carriger’s world. She covers her tracks in that she gives enough information that the reader isn’t lost if they have not read the other books but there’s a sense of history, of fractured blood ties between groups that makes for a deliciously complex backdrop to the story.

For those who have visited Carriger’s world before, this is a return to the outrageous adventure that started with Rue’s mother, Alexia. Prudence does start off slower than Carriger’s other books. The author takes time to establish herself in a London that’s changed in the twenty-year gap between series. I found the pace surprising, as her books tend to hop right into the drama. It was a nice change though as Carriger checked in with well-loved characters from her first series. Another surprise was how little Rue had been told of her parents history and what had happened before she was born. As a fan of the author, I felt like I knew the secret handshake already. It was amusing to watch Rue pick up snippets of information and try to work things out for herself.

Besides the world-building, what carries the story is the witty repartee between the characters as they maneuver through the challenges brought on by airship travel and uncivilized adversaries. Carriger has always been one for dialogue, and she manages to weave layers and barbs into the verbal fencing between Rue and just about anybody she comes up against. If you’re a fan of language and Victorian sensibilities, this is a book for you.

The story is definitely absurd at times. Carriger never ceases to chase the preposterous or silly. I found myself laughing out loud at some of the crazy hijinks the author puts in the book. For example, Rue’s dirigible tends to fart as it changes speed and direction, an engineering glitch that can’t be helped. Rue also ends up nude on multiple occasions from changing form into a werewolf and back, often in the most inappropriate places. You can tell Carriger is writing as much to amuse herself as the reader. She also doesn’t disappoint fans by providing new monsters and gadgets as she widens the horizon of her world.

The main plotline mystery of tea and kidnapping was overshadowed by the over-arching storyline of what’s happening with Rue’s parents. Carriger is setting up an inevitable shift in power between the supernatural factions. Frankly, I’m hooked. This is definitely not a one-book deal. Enter only if you want to read a series. Prudence leaves you with a bunch of questions. I want to know how Carriger will handle what’s sure to be some serious upheaval in her world and where she is taking Rue’s character in terms of romance and position in society. And I want to see the inevitable conversation about the past between Rue and her mother, a woman who still calls her twenty-year old daughter “infant.” 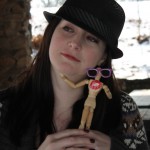 Kitty Shields is a writer, artist, bookbinder, and all around troublemaker. She is about to graduate from Arcadia with her MFA in Creative Writing. When not working on her novel, she spends way too much time taking pictures of an art figurine she has dubbed Miss Vivi. Feel free to check her out at kittyshields.com or follow her on Instagram @kittyshields

Previous: What I Want and What I Want, by Chelsea Martin
Next: Nick Gregorio Reviews The Laughing Monsters by Denis Johnson