Behind the Scenes with Fran Daulerio Part II

Fran Daulerio’s first book of poetry, If & When We Wake, will be released on April 24th through the Unsolicited Press.  In this interview, Minotaur’s Spotlight asks him some questions about If & When We Wake and the process leading up to its publication.  Read the first part here.

Your book is going to have pictures in it.  What’s the deal with that?

I’m super excited about this.  My poems are short, which can look pretty cool on a page.  But too much blank space can make a book feel too thin.  When the suggestion was made to add art to the book, I immediately thought of Scott Hutchison.  Scott sings in the rock band Frightened Rabbit, who I’ve been listening to for a long time now, but he actually started out as a visual artist.  I had seen his work here and there and loved it, so I figured I’d take a shot and see if he’d be interested in adding some drawings to the book.  I sent him a few links to poems I had published online and explained what my vision was, and he (surprisingly) got back to me and said he’d like to give it a shot.  That was back in June of 2013, and since then we’ve spent a lot of time going back and forth with pictures and ideas.  I’d send him updated manuscripts and he’d send me emails with images that he came up with while reading.  I didn’t give him any direction.  I wanted the art to be completely his call, and what he’s come up with is remarkable.  The pictures break the whole book up quite nicely, too.

I couldn’t be happier to have him involved in this.  He signed on before I even had a publishing contract, so it was pretty incredible to have one of my own personal influences working with me just for the hell of it.  Now that we’re coming down to the release, I’m getting emails from Atlantic Records and the Warner Music Group about promotion, and it’s really all just so hard to wrap my head around.  I’m hoping the Frabbit fans will be into this book.  I’ve felt very much a part of that community for a long time, even before I started writing, and I’d love to think that I contributed something to it that could be enjoyed by like-minded folks.

I imagine that, since writing the very first poem that will appear in this book, you’ve had many successive visions of how you wanted the book to turn out.  I’m speaking, now, of layout and design, but also of the poems in it.  How has your vision of the book changed since you first started writing it?  Will the final book turn out to be very different from how you initially imagined it?

Not really, no.  The vision has been pretty firm throughout the whole writing process.  The title changed about halfway through, and the way the book was structured shifted a bit, but I’ve otherwise held on to my original vision.  I started writing these poems as a sort of cathartic way of dealing with the loss of my grandfather, who this book is dedicated to.  I wanted to take a look a how loss informs our own thoughts on existence and personal authenticity.  Basically I wanted to explore how facing the fact that we’re going to die, I mean like up close and personally facing it, changes the way we live our lives.  Not in a bucket list YOLO shitty way, but in a real “this is what I have to work with” way.  Realistically, knowing that this whole thing is a one-shot deal should make the concept of life really beautiful, but the routine distractions and petty setbacks keep a lot of people from seeing that.  So this book tries to walk readers through that process of loss, grief, depression, and recovery from my first-person perspective.  That’s been my goal throughout, and I think I’ve stuck to it.

As for design, we’re doing it on heavier paper, and the cover won’t have that slippery gloss to it.    I want it to feel like a little field manual, or a Farmer’s Almanac.  Something you’d stuff into your back pocket before you go for a walk in the woods.  There should be something really natural about it.  That’s the goal.  Scott’s drawings helped bring that feeling out, and so many of the poems focus on the seasons and growth that it would have been weird to do it any other way.

That’s a good question.  Because they’re short?  Our attention spans are getting shorter and shorter, so maybe I’m just capitalizing off of a budding human insufficiency.

I’d like to think that people like my writing because they can identify with it.  We’re all basically experiencing our own versions of similar life events, so I think my work comes to readers in a familiar way.  I try to draw out emotions by pairing them with other concepts that everybody understands.  One of my favorite poems in the book is about having to call family members to inform them of a death, and I linked it to that split second before the bombing of Hiroshima, where everything was cool and people were oblivious and nobody had a clue what was about to happen.  Then there’s the impact, and the phone rings, and life can’t ever carry on in the same way again.  That’s what I go for when I write.  I want people to feel what I’m feeling in the way that I’m feeling it, so I spend a lot of time coming up with connections that will facilitate that understanding.  At least I’d like to think that’s why people like my work.  But yea, probably because it’s short.

Inspiration: vacuous Romantic concept or thing that happens irregularly . . . but is real?  (Can you describe either moments or sources of inspiration that have help you in writing this book?)

I think inspiration is a real thing.  I think it’s annoying and doesn’t feel the need to cater to my timeline, but I definitely think it’s real.  I’ve never been able to just sit down and write for the sake of writing.  I hear about musicians and writers setting up their days like they have 9-5 jobs, and I can’t imagine the frustration I’d experience if I did that.  I go through dry spells, which are normally a lot longer than any periods of inspiration, but when those spells end I can normally get a decent amount of work done.  But I can’t make it happen.  A lot of the poems in If & When We Wake originally came into the world on my drive to and from work.  I’d be on the highway reciting poetry into my phone, and then I’d type out what I came up with at my lunch break.  Another poem started out as a post-it note drawing of a ghost climbing a ladder.  That’s what I mean.  It just spontaneously happens.  Sure, there are some awesome exercises that can really help with idea generation, and I’ve written some successful work that way, but when it comes down to it, I just need to let it happen.  I had a hard time in grad school because I was expected to hand in work pretty regularly, and sometimes I just couldn’t.  I learned to harvest every bit of creativity I could when it happened, and I’d use it to hold me over during the barren periods.

Have you started writing your next book of poetry yet??? Why or why not?

No, but I’m thinking about it.  I’d like to get some feedback on this release first, so I can get an idea of what worked for people.  But it’s definitely something I’m thinking about.  My cousin’s boyfriend owns a little patch of waterfront forest on Lake Norris in Tennessee.  There’s a poem about it in the book.  It’s pretty primitive right now.  Just a wooden deck with some mosquito netting around it and an outhouse, but it’s totally surrounded by trees and so quiet.  I’m thinking about asking if I can go stay out there for a week or so by myself to generate some new ideas.  No technology.  Little human contact.  The full Bon Iver experience, you know?  Like I said, I’m bad about sitting down and just writing, but I think the solitude could be great for generation and will give me time to digest the past few years.  I’ll probably come back with Lyme Disease and a bunch of doodles, but it might be a cool experience.  There’s really no way of knowing what’s going to happen next, right? That’s why this whole living dilemma is so astounding. 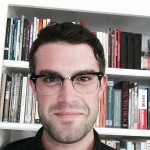 Francis Daulerio is a poet and teacher from the Philadelphia suburbs. His work has recently been published in The Fictioneer, Whiskey Island, The Stone Highway Review, and Written River. His first full collection of poetry will be released in April 2015 through the Unsolicited Press. More information can be found at www.FrancisDaulerio.com and @FDwrites. 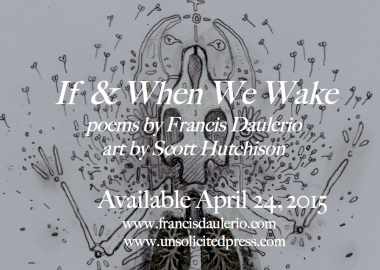