Reviewed and Reconsidered: Sophia Katz’s The Title of This Book Is An Inside Joke (Metatron Press)

Sophia Katz’s first book, The Title of This Book Is An Inside Joke, from Metatron Press was published in March 2015. After reading a book I often return to the cover. When I came back and ruminated on the title that plays like a color spectrum across white space I realized how it was functioning. Simply, the title is a representation of the whole. But we can’t really know the title till we get to what’s inside the book. The inside joke between the two covers which reflect on the title and give it its meaning. This joke is dark and captivating. A later poem in The Title Of This Book Is An Inside Joke (TTOTBIAIJ) is titled, “I’m a piece of shit genius and I don’t know what to do.” I could relate to being a piece of shit and much of the black humor here.

Katz is a writer, musician, and media artist living in Toronto. Her recent work of media art which drew my attention was a video that slowly zooms in on an image of Mars with an accompanying piece of electronic music that becomes more unsettling the closer to Mars you move. Imagine a distorted deep howling slowly pulling you into the planet. The music is part early Oneohtrix Point Never ambient and current OPN disturbing metal electronic. Another interesting thing about this piece is that it seems the title is a quote by George W Bush.

TTOTBIAIJ is a hybrid work of poems and stories that read more like a diary. This feeling is strengthened by Katz’s use of dates as titles. The earliest date/title is “10.30.13” and the final given is “3.15.14,” so we are in a span of time encompassing Christmas, New Years, and school break, each in their own right stressful times. These times are often filled with family and friends, translating to human interaction, a theme focused on throughout TTOTBIAIJ. In “New Years 2014” Katz writes,

I felt isolated but fairly content at midnight, which seems too often be the most anxiety inducing moment during New Years Eve. I was surprised at my neutral demeanor and how easily I remained calm in regards to not kissing anyone or making any ‘meaningful connections.’

Katz is successful at showing the breakdown and complications of relationships. In part due to means of communication but ultimately stemming from human interactions which seemed to dwindle as I moved through the book. She writes of a failed living situation,

I received word of this via Facebook, with a message from Caroline sent at 10:43 am 2.5 days ago that started with the word ‘Hi’ and ended with the words ‘I love you.’ She told me I had to leave by today so now I’m in this hostel hotboxing the bathroom.

Along the lines of relationships in this collection I felt a strong connection between Katz and Bukowski’s poetry. Both are viciously honest in their expression of their understanding of human connections. Bukowski said, “Of course it’s possible to love a human being if you don’t know them too well.” I believe Katz would agree with him here. Katz ruminates on relationships in a similar manner saying,

Frequently I hear people say that the ‘healthiest’ relationship is one where you can completely be yourself. I don’t believe this for many reasons, but mostly because it seems insane to brand someone with any other label than ‘themselves.’

It’s not easy to get close to someone and Katz reminds how close connections are formed. There can be pain and anxiety and learning through both of them. We always hurt the ones closest to us. She writes this new and takes it as her own while expressing pleasure through other’s pain,

I feel liberated when I feel shitty. I feel grateful when

I hurt the people closest to me.

In another poem there is an anticipation of contentment that quickly reverts to a crushing pessimism,

I see someone that I never want to stop talking to,

or looking at, or thinking about.

Those people are shitty and bad.

Those people are you.

Katz and Bukowski also share the ability to achieve clarity in their observations. Compare the first lines of Bukowski’s poem “the night I saw George Raft in Vegas” with the second and third stanzas of Katz’s poem “12.15.13.”

I wonder what Chekov would do, and over in the corner three

blue plates sit eating the carnage of my youth, they have beards

On the way to find pizza after Karaoke a white

pickup truck almost hit me. I jumped on the back of

it and yelled ‘I had the right of way’ drunkenly ~6

times before jumping off.
While eating pepperoni pizza I discussed the merits

of racism with a man wearing exclusively camo who

had the word ‘pussy’ tattooed on his left knuckles. I

felt gross in a good way after eating the pizza. My

stomach felt full and warm.
Both of these excerpts are strongly rooted in the first person speaker and create moments that ground the poems in reality while maintaining an elevated level of meaning in the images and actions. Bukowski connects the red, to the carnage, Chekhov to the men who look like Russians and of course the pistol. Katz connects the white pickup with the racist man, the word pussy stands out and adds a sexual connotation to the white pickup that almost hits the female speaker, the right of way in terms of women’s rights and the gross feeling yet the full and warm feeling.

Katz succeeds in expressing the contemporary throughout TTOTBIAIJ. From including the reality of drug abuse, Macbooks, a poem devoted to what’s in her BPA free water bottle, the film The Room and its actors, Netflix, G chat, composer Nicolas Jaar and his collaboration project Darkside, and Boiler Room DJ sets.

When it comes to expressing the use of drugs like MDMA, better known as ecstasy, oxycontin, and marijuana I am reminded of William S. Burroughs semi-autobiographical works drawn from his life as a heroin addict. Like Burroughs’ in his writing involving drugs, Katz writes of drugs as natural occurrences in daily life, discussed with a distant, laconic tone. The speaker in one story takes MDMA and discusses it with her current roommates,

“Sweet. I took MDMA and then came here. Now

I’m here and coming up and feeling bummed.”

“Do you have any MDMA left?”

“No, someone just gave it to me. I’m going to go

Later, the speaker ironically tries to watch Drugs Inc. but cannot concentrate on the show and attempts to fall asleep. In the poem “Tiny Cheeky Bunny,” Katz again ironically and at the same time desperately writes of smoking habits,

I am recovering from bronchitis but haven’t stopped

smoking weed. I quit smoking cigarettes because they

and tired after smoking. I smoked ~3 cigarettes a

The feelings of sickness, often drug related, and loneliness correspond in this book. The drugs are often received and taken in social settings. The comedown and the sickness go hand in hand.

Many people when feeling sick don’t want to interact with anyone while others want only to be taken care off. It’s difficult to tell which the speaker is in TTOTBIAIJ but we do learn one thing. Even though loneliness is a major focus we come away from the book having learned a strong and independent writer unafraid to take chances and who’s “Tweet drafts,” might actually include, “saying my own name makes me extremely anxious,” and “feel pretty good re: first experience bringing drugs over the border.” 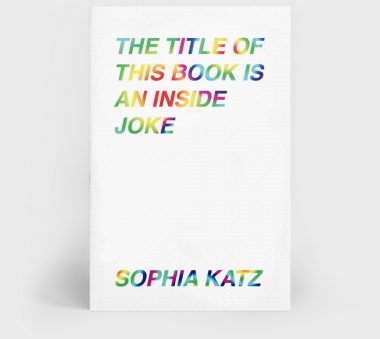