I almost didn’t attend Luke Brown’s reading at the Edinburgh International Book Festival last summer. It was a long day, an unknown name. (Two unknown names, I should say, as Brown was reading with Nick Harkaway—who is apparently not as unknown on the side of the pond opposite my usual.) But I did. And I’m glad of it. Discovering new voices is, really, the point.

Brown’s novel My Biggest Lie is one of those rare combinations: entertainment that is more than entertainment. A quick and fun read, it offers enough suspense and humor to pique interest while being sensitive to its characters and grounded in apt observations about their behavior.

The novel, Brown’s first, was published last year as a trade paperback. It was released in March in mass-market format, which is unfortunate only because the trade cover captures the mood of the book so much better.

My Biggest Lie follows disgraced book editor Liam Wilson as he escapes to Argentina following the death of a major client and the failure of his long-term relationship. Liam, narrator as well as protagonist, shares at least part of the blame for both events, and the book is his confession. Determined to earn back professional respect and win back his girlfriend, he sets upon a plan for self-improvement—but just can’t seem to avoid the indulgences one finds in Buenos Aires.

And indulgence there is. By the end, it is a miracle there is only one death from overdose.

Liam’s primary motivation is sensation—sensation of all kinds: physical, emotional, aesthetic. He opines over opiates, longs for love, basks in beauty. His hedonism, though, is balanced by sensitivity and romanticism. Even as his estranged girlfriend Sarah calls him out on his “silly romantic language” that doesn’t “begin to redeem… [his] excuses and lies,” the reader cannot help but be caught up in his earnest sentimentality. Liam is in love with the idea of experiencing love. It’s a shame he doesn’t know how to do it.

Liam is indeed a liar. He is not a malicious one, though, merely weak-willed and self-indulgent. As one character tells him, he thinks too much about what he says, not too little. He lies; he omits; he rationalizes—to himself as much as others, even as he knows he’s doing it.

Anytime there is an unreliable narrator, much is asked of the reader. Here, much is rewarded in return. As one reads, one ultimately wonders not what is true and false, but how many forms of truth and falsehood we surround ourselves with each day. As Liam himself says, “It isn’t only writers who make themselves into characters: it’s one of the commonest failings, one of the purest joys.”

Who among us has not stretched or spun the truth at one time or another? Who has not at some time failed to recognize their true self? It is easy to point at Liam, or one of his reckless larger-than-life role models, as the biggest liar, but no character in this book is without sin.

This is not to say the novel takes its topic too seriously. Quite the opposite. While it is not as laugh-out-loud funny as the cover blurbs may indicate, Brown writes with a sense of wit, irony, and self-awareness that makes one at least chuckle out loud. Taken too seriously, the indulgences and infidelities featured in this novel would soon become trite and melodramatic. With Brown’s deft touch, the excess emotion is a function of character, a natural outgrowth of persona, plot, and setting. Liam’s tears may be as excessive as his drug use, but ultimately his biggest lie becomes his greatest truth.

Somewhere between truth and falsehood lies perspective, and Liam Wilson’s is one to read. My Biggest Lie ends with a brief but important note of insight and change that indicates his experiences have been worthwhile—and so, too, has been following him.

Nathaniel Drenner is a graduate of Arcadia University’s M.F.A. in Creative Writing program, after having earned an M.A. in English from the same institution in 2013. His short fiction will be published in some journal, somewhere, someday. 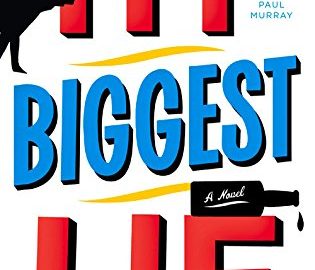