Reviewed and Reconsidered: Oleg Pavlov’s Requiem for a Solider (And Other Stories Publishing)

The failing Soviet Union was a gritty place, friends.  Gritty and unfair, although not without a peppering of good people, слава богу.  Russian author Oleg Pavlov, who personally served as a military prison guard in Kazakhstan, wrote Requiem for a Soldier in 2008.  It was only recently translated into English by Anna Gunin in 2015.  This work contains the kind of intimate perspective that can only come from someone who has first-hand experience with such a life.  The story is about a soldier with the surname Kholmogorov, although he’s often referred to as Alyosha.  He serves his time in the military, spending some of it at the desolate firing range under the command of a deaf, grumpy, but fatherly old man who refused to leave his military days behind.  Alyosha is released from the service and is promised a steel tooth as a gift from the old man who looked after him.  Due to a string of events, Alyosha never actually leaves to go home, and gets sucked into helping to relocate a dead man’s corpse under some suspect conditions.

I adore Russian writers for many reasons, one of which is their incredible ability to layer meaning into a single instance of descriptive prose.  Pavlov is no exception here, and while I am normally a staunch critic of marking in books, I found myself frequently thinking I would have given anything for a highlighter.  Pavlov’s metaphors are magic, and have deep, involved meaning packed into them, like delicious stuffed блины́ (see what I did there?).

Alyosha Kholmogorov’s soul was like a thick porridge – rather than spattering about, all it did was retreat into itself, its warmth gravitating towards stillness.  When his soul was suffused with heat, it just puffed up impetuously like a toad’s bulging throat.  And it always needed time – it was slow to flare up and slow to cool off.

There are other expertly crafted metaphors that aren’t just descriptive tools, they’re often whole abstract concepts in themselves that happen to also be used as a method of explanation.  They stick out as moments of diamond-like clarity amongst the dense, fast-talking dialogue and the forest of weird personalities.

The story shifts mood and pace drastically about ¼ of the way through.  It goes from being dark and lonely, but somehow peaceful to dark and lonely, but now infused with drama and chaos and corruption.  It’s as though in the first section, you’re watching the story unfold while standing in the same room as the characters.  Then suddenly, you’re behind a mud-streaked window, watching the story unfold through the clear pieces between the blurry lines that are partially obstructing your view.  I actually appreciated this viewpoint, since it allows for a reflection of how Alyosha feels: he is swept away and always kept partially in the dark about the goings-on he’s suddenly, unwittingly complicit to.

This stirring-up of the story does present what is likely my only critique of the book: it’s often difficult to follow who’s speaking when there are several people in the scene.  Each character is distinct from the others, and the character development is exceptional.  But without many dialogue tags, it’s still hard to keep up in a group setting, and the dialogue itself is written in long, soapbox-like paragraphs of opinion, rather than a line-by-line, conversational format.  Once a character gets rolling with what he means to say, it will be quite some time until you reach some helpful context.

In terms of character development, Pavlov still allows Alyosha to be deeply human and caring through the rigid reality that’s portrayed, and sets him up as a strangely optimistic soldier from the beginning.  By the end, Alyosha is broken, still not the smartest guy in the room, and is missing some teeth, but still holds onto his original personality to a large degree.  I love this particular perseverance of his character – some would say he’s static, but I prefer to point out that he’s predictable, which fits with his development.  I deeply appreciate books in which the character comes to no grand realization and goes through no major transformation of character.  They’re difficult to write well and rare to find, and yet I feel they are often the most grounded books.

Requiem for a Soldier is weird, dusty, and uncomfortable.  Immediately after I finished this book, I put it down and thought to myself, “Well, that was an interesting read.”  But about a week later, I found myself thinking about it — not about the whirlwind Alyosha was swept up into, but rather the distinct moments of beauty within all the ugliness.  It’s a book that sticks with you in unlikely, but pleasant ways. 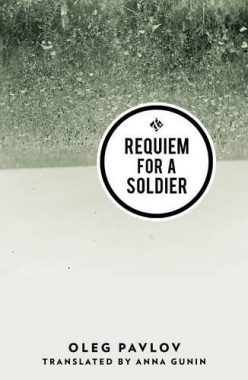