Every now and then poetry can make you lose your footing. In the midst of a collection, you get hazy, stumble around, try to remember who you are in relation to the poem. Danez Smith’s [Insert] Boy (YESYES Books) erupts with smoke and glitter. If it were one of those anthropomorphic books from The Pagemaster, it would be drenched in parade glitter with one hand forming a fist and the other holding a microphone. It’s a wake-up call, a confessional, and an experiment. It’s one of the most “alive” collections of poetry I’ve ever read.

The entirety of the collection is a bildungsroman arranged chronologically. The first section, titled “[black],” offers a post structural perspective of what it means to both black and a boy, historically and linguistically. In the poem “Alternate Names for Black Boys,” Smith examines societal prejudices against young black boys in the form of a list:

With startling clarity, Smith communicates the effects and implications of growing up around racial violence. This collection is not like the coming-of-age narratives readers might be used to — it is polemic and aptly commands us to enter into the warzone, so to speak, and empathize. In “For Black Boys,” the speaker states “white folks are afraid when you speak / hot wound where your mouth should be” (4-5). Using visceral imagery Smith addresses the black boy, and quite possibly himself. The poems in this first section are each raw, yet sympathetic. It feels the way it does when you explain ideas of violence to a child for the first time.

The mouth is a recurring symbol throughout the collection. Later the same poem reads “I say / Devonte & my mouth drips stray braids. / I say Keshawn & vomit gold teeth” (48-50). As the collection progresses to later sections, such as “[rent],” Smith again refers to the mouth. Now, instead of being in the context of conveying symbols and stereotypes of blackness, it is to convey the tension between belief and sex during the speaker’s time as a sex worker. In “Craigslist Hook-Ups” it reads: “forgive me father for I have knelt / beside my bed with an open mouth. Forgive me / if it looked like prayer, for giving away your mouth” (5-7). The mouth, in this collection, is a source and symbol of power. Smith is aware that poetry is a weapon, and his words can evoke change.

In terms of form, Smith utilizes white space, extended, and hybrid poems throughout. The printed organization of poetry was extremely reminiscent of C.D. Wright for me. Readers are not meant to follow a neatly organized poem, but instead understand the journey of the speaker. There is a definite mimesis to each of these poems as many transform from verse to prose to reflect the tone of the speaker. Sometimes the writing is too impassioned to concern itself with line breaks. My personal favorite poem, “Genesissy,” begins in prose format and wittily, yet wisely predicts what God did after the seventh day: “ //& on the tenth day, God wore a blood red sequin body suit, dropped it low, named it sunset //” (5-6).  Then, the form quickly becomes fragmented and disjointed on the next page:

Before the end of the page, the poem finishes in verse “the sweet girl’s funeral begat / her aunt’s disgusted head shake” (26-27). The verse continues to the next page, which is mostly white space. This space complements the poem’s closing question “& that can’t come from God right?” (33).

Smith’s utilization of the written page as complementary content is one small part of what makes this collection so powerful. As I stated earlier, these poems, to me are an experiment. They do not seek to mimic past forms, or follow any guidelines. They are Smith’s mouth and words moving with and against the page to bring readers directly into his headspace. With a collection that is so activist-minded, I could not think of a more appropriate writing style than the urgency found here. The poem “10 Rentboy Commandments or Then the White Guy Calls You a Nigger,” uses line breaks to suspend the reader in the degradation of the scene:

he thinks of you as a lion or AIDS

or anything scary & African. (when anything

goes, don’t panic.) you know he thinks of you

as his son which makes you scared

These lines are again from the section discussing the speaker’s time as a sex-worker. The masterful breaks unweave to allow the reader to get a sense of not only the pain of this situation, but also the verisimilitude.

[Insert] Boy is a collection that will make readers visualize every haunting, painful, and sometimes wonderful image in full color. In “Warming,” Smith writes “somewhere a white bear is floating away on a throne of ice & that / is too gorgeous in its own frightening way” (9-10). These poems are just that: gorgeous words with a frightening truth we all must acknowledge. Smith can take the taboo and make it beautiful: “what is semen but condensed cloud / the body’s recipe for lightning?” (“I Cast Out My Tongue Like a Key” 21-22). Images like these seduce the reader with poetry at its most powerful. However, the power extends to the hands of the reader as well. It’s a book that doesn’t ask to be read passively, but also to be acted upon. Smith writes from a place of oppression and speaks out to find help for both black and LGBTQ communities. In “Song of Wreckage” he writes “I have no time for Red to be beautiful / with summer bloodied as it is” (1-2). The words of [Insert] Boy are weaponous, and readers will willingly, frightfully, and jaw-droppingly listen to every one. 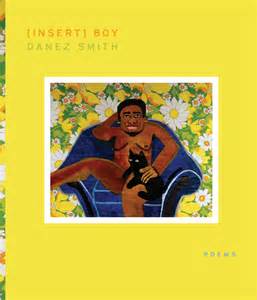