Denis Johnson has stayed off the mainstream literary radar for most of his career, despite its spanning nearly three and a half decades.  His work has been praised by critics, he had a novella nominated for the Pulitzer Prize, he has written everything from fiction to poetry.  And yet, no bestsellers, no big-budget Hollywood blockbusters based on his work, and no endcap displays at Barnes & Noble.  He simply has a small but loyal audience, and the literary chops deserving of much, much more.

Johnson’s most recent effort, The Laughing Monsters, veers away from the style and tone of Train Dreams (the Pulitzer Prize Nominee.)  He trades a slow, deliberate, and introspective work of fiction—its emulation a more surefire way to gain similar praise—for something of a return to form.  The Laughing Monsters is minimalist in style, erratic and paranoid in plot, and ultimately a display of constantly shifting loyalties in a post-9/11 world.
The novel’s protagonist, Roland Nair, works for a myriad of government agencies hailing from various countries.  He uses his experience and influence to gain a shaky independence of sorts from all of them as he reconnects with his old colleague, Michael Adriko.  The characters’ fundamental distrust of one another, and their shared feelings for Adriko’s fiancé, Davidia, leads to trek through war-torn African countries in which they discover that lying is an essential part of living, and paranoia is the proper mindset with which to continue living.

Johnson’s detached narration gives readers only what is necessary.  Which is to say he writes just enough for readers to understand that his characters exist and move through a physical space.  In order to fully understand Nair and his quest for something that even he is unsure of, readers are asked to follow, not to understand.  Gaining a foothold on the plot is as futile as comprehending the reasons behind Nair’s journey.  Truthfully, this novel is a character study masquerading as a plot-driven tale of suspense.  Nair’s descent into personal darkness is the true story here.  There are no answers to the questions herein, no plot threads tied up and decorated with a bow, no closure, and no relief.  The Laughing Monsters is a display of a period in time when confusion reigns, violence is expected, and loyalty is merely a word.

Johnson could very well have written a novel to recreate his recent success.  Instead he chose to write something that invites readers to be as confused and paranoid as his characters in order to reflect sentiments of the immediate post-9/11 world.  This is not a leisurely beach-read, or bestseller material.  It is Johnson doing what he does best: writing what he wants, when he wants, for whoever cares to pay attention. 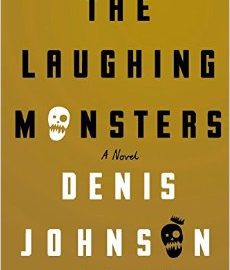 Previous: Podcast Roundup: SAFTAcast
Next: Reviewed and Reconsidered: Sophia Katz’s The Title of This Book Is An Inside Joke (Metatron Press)