Replies: A Conversation with Nathan Ballingrud

A while back, I was casting about for something new to read and an old professor of mine suggested Nathan’s collection of short stories North American Lake Monsters. From there, I was sucked into an intense journey of florescent monsters that wash up on the lakeshore, alien beings that help with your sex life and make you want to eat them, charming vampires that live beneath your house and whisper to your little brother at night, and all of the other dark and twisted bits of people that come to light in trying circumstances.

If I had to choose a genre for Nathan’s collection, it would probably be somewhere between contemporary horror and realism with fantastical twists. But I think I could also argue that these monsters and more fantastic elements are not always the focus of these stories. Sure, they lurk at the edges with their weird appearances, but the real monsters are usually the human ones.

For more about these incredible stories and how he puts them together, I asked Nathan a few questions.

What comes first for you when you sit down to write a short story like the ones in North American Lake Monsters, is it the overall concept or is it the characters?

Usually the concept comes first, but I can’t go anywhere with it until I figure out what human trait it wants to illustrate. For example, in “Wild Acre,” I knew I wanted to write a werewolf story. I was working on painting houses at the time, and sometimes, after a late day, I’d walk through the site on my way to the car and be struck by how lonely and strange the skeletal house frames looked against the twilight sky. There was something so primal and evocative about it, about this encroachment of banality into the woods. This was right around the time of the real estate bubble popping as well, and there were a lot of angry, frightened people around. I was one of them. Werewolves – and the struggle with the effort to tame a primal rage – seemed a natural fit for the setting and the characters.

How do you balance the stranger elements with the more realistic elements so that one doesn’t completely overshadow the other?

With these stories, I very consciously wanted to push the supernatural into the background as much as I could. I was fascinated by the idea of focusing on what I think of as walk-on characters in a traditional supernatural story. The waitress in “You Go Where It Takes You” would just be a single page out of the skin-changer’s story, if it were told traditionally, but I wanted to explore how the strange or the miraculous affects the lives of the people left in its wake. In “S.S.”, something profound and awful is happening to the mother – but we don’t need to know too much about that. What happens to her child, growing up in that house? In “The Crevasse,” what exists at the bottom of those stairs is the least interesting part, at least in my mind. What experiences do the people who discover it bring with them, and what kind of bell does it ring in their minds? Even though the supernatural is more overt in “The Monsters of Heaven”, the same principle holds: I didn’t care what the angels really were, or what was happening in the larger world. I wanted to show how it changed the lives of two background characters to that larger, implied narrative. What happens when you drag a miracle into your living room? “Sunbleached” was a little different, though. I just really wanted to write a scary vampire story.

I know there are several stories in the collection that are set in a particular area, one of my favorites being “The Way Station” where Beltrane has New Orleans leaking out of a hole in his chest. But, how important is setting to your stories?

Setting is extremely important. Where we live shapes who we are, provides as with regional values and the cultural mores by which we judge ourselves and others. Recognizing the limitations of those values, as many of us know, can become a lifetime’s work. “The Way Station” is about as explicit as I’ve ever been about that, but I think it informs most of my stories. Even in a story like “The Good Husband,” which could take place in just about any American city, the “home,” and all the domestic comforts it implies, is the crucial setting, We build our place of safety, lock the doors and close the windows, only to find that the horror is boiling up from our own living room.

In some of your stories, I’d say your language style is kind of minimalist. But of course, you definitely have some more poetic lines in there as well. Is that something you’re consciously aware of when you write or does it just flow? Also, would you say there are other writers that have influenced your own style, and if so who?

I aimed for simplicity in these stories, always keeping in mind that simplicity does not preclude elegance. Hemingway was probably my strongest influence here. He has a reputation for writing simple, subject-verb-object sentences, but that isn’t really true. You’ll find many long, beautiful sentences in his work, especially in the first half of his career. They seem simple because they’re so elegantly constructed. I’m captivated by that kind of command.

I know you also have a novella The Visible Filth that just came out recently, but I think of you more as a short story writer. What was it like to switch from writing something short to something longer? Do you prefer the short story or the novella length?

It’s hard to say just yet. They both have their own rewards, and they both offer their own challenges. Like many writers, I find I’m writing longer as I work more at the craft. I like the freedom to dig deeper into character, and to wander a little of the path sometimes. I find I’m increasingly intrigued by digressions, even by asymmetrical structure in a story. I’m trying new things with the next batch of stories, and often that means I need more room to move.

Finally, do you have any advice for emerging writers or maybe any reading recommendations?

The best advice is the oldest advice: keep reading and keep writing. As long as you do those things consistently, you’re on the right path. I also like Neil Gaiman’s advice: finish what you start. I’ve found that to be immensely helpful to keep in mind. It may seem simple, but the best advice usually is.

I love giving reading recommendations. I think everyone should read adventurously. Go outside your comfort zone, actively seek out the kinds of books you would not normally come across. Once I went through several months of only reading books through translation, by writers I’d never heard of before. It was eye-opening, and so much fun. This is not to say you should abandon your comfort zones, either. Reading is a joy, not a chore. Venture into strange territory, and then come home to rest. Repeat throughout your whole life. 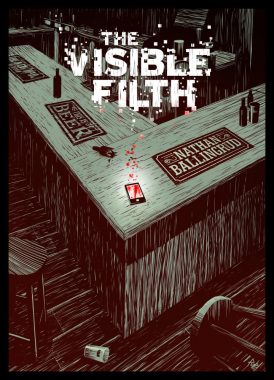